Welcome back. Today’s post will be about CP transcriptions that I have found online, and some other news.

There are three videos which have appeared in my suggestion feed on Youtube that I think are fantastic arrangements of CP music.

After I first watched this video, I clicked on ShinkoNet’s channel and noticed he was streaming, so I watched some of his stream as he was creating a MIDI live. From what I gathered, ShinkoNet creates very professional MIDIs with a program called FL Studio. While my goal is to arrange playable sheet music of the songs (which I then export it as a MIDI), he doesn’t even use sheet music, but rather makes very impressive MIDI files with a digital audio workstation.

On the day CP shut down, he did one for Cart Surfer, and it is probably the best MIDI of a Club Penguin song ever made. Aside from being note-for-note accurate, it contains a guitar sound nearly identical to the original, and is complete with all of the drum tracks. Not to mention that Edirol SD-90 looks way cooler than Synthesia.

I believe this song was only in the “Elite Penguin Force” game for Nintendo DS, so I never heard it before I saw this video. But after hearing it I do really like it, and wish they had put it in the real game. Slippy Toad created a great arrangement and Synthesia video, and the MIDI is available for download in the description of the video.

This version of the song is the piano remix of Pizzatron 3000 (SWF #344) that briefly replaced Charlie’s Here in the Pizza Parlour from around November 2012 – May 2014. Afterwards, it became available as igloo music. Richard Mundy wrote an accurate transcription for the piece on sheet music, the video is similar to how I record videos with Noteflight playing sheet music.

I really like each of these videos. Then I decided to find what other videos are out there. After a good 5 minutes of searching online I was able to find 4 other arrangements and 2 covers: Gary’s theme DS and Dojo theme DS (solo piano arrangements) by Dialga22239; Dojo arrangement by Michael Holt; Town theme 2014 by Uri2000; Club Penguin Jazz Medley by Tyler Jenkins; and Town theme by Amosdoll Music.

Aside from these 9 videos, there’s really no other sheet music or videos of sheet music of CP songs out there, other than my channel, so I hope to continue making CP transcriptions and uncover more of CP’s great soundtrack.

In other news, I thought I’d share some of the statistics of my MIDI file service since I started it on Feb. 15:

So far I have received a total of 133 midi requests from 20 different people, for an average of 6.65 requests per person.

Each of the 24 songs I have transcribed has been requested at least once. The most requested song is Charlie’s Here, with 13 requests. Pizzatron 3000 and 8 Bit are tied for 2nd, with 11 requests each.

The form has been submitted 32 times, for an average of 5.6 submissions per month, and 4.2 song requests per submission.

In other other news, Pewdiepie used the same spiral-staff-music-notes image in his thumbnail for a video he made recently as I did in the cover photo of one of my posts! (Lol it may be ridiculous to even mention this but hear me out).

And here is the cover photo I made for my Spooky Jazz Sheet Music post on February 8, 2018 (5 months before)!

AS YOU CAN SEE, it is the exact same same spiral staff image that I found on google, just rotated 90° to the left. You know what this means? That’s right. Pewdiepie got the inspiration for that thumbnail from my blog. Hence, Pewdiepie reads this blog #confirmed.

It all makes sense now. I believe it was at the start of 2017 that Felix briefly moved offices to Club Penguin’s old UK office in Brighton, and even played the game on his channel (CP Wiki). He obviously enjoyed the soundtrack, and was interested in finding music arrangements to play, and inevitably discovered this blog. I think this deserves a \(°0°)/

Thanks for reading, hope you enjoyed this post. More CP music coming soon! 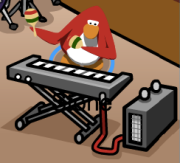